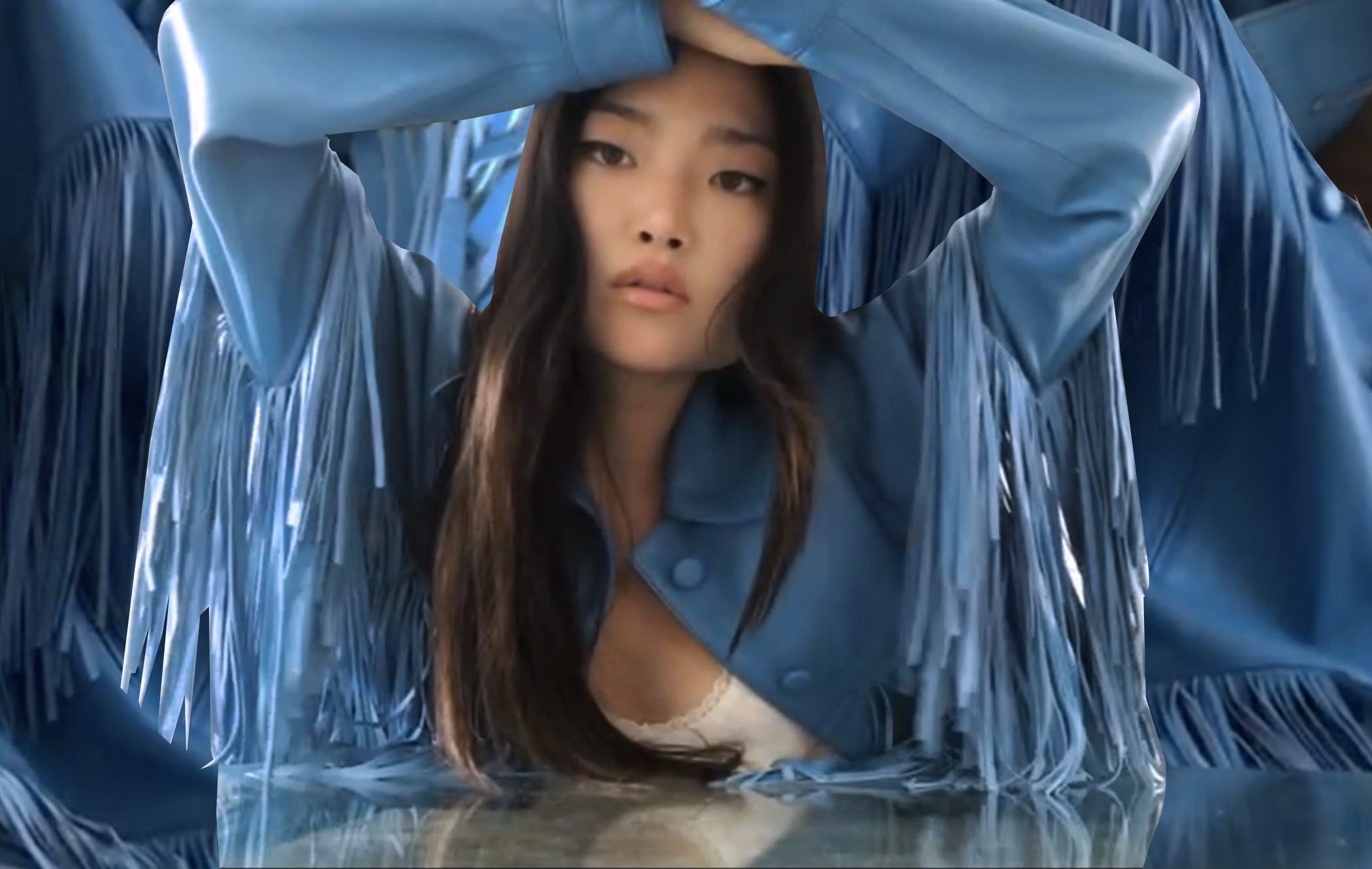 We are so fortunate to speak with and learn from such inspiring women for the Voices series, each divinely brilliant and talented in their own right, who so openly share their journeys from budding dreams to present-day realities. A common thread which ties these extraordinary women together is the profound cultural and familial influences that have shaped their perspectives creatively, emotionally, and mentally. Values are formed, and character builds by applying these invaluable lessons to their own experiences. Eventually, this develops the instincts which sharpen senses in preparation for physical decisions.

Instinctively knowing when it is time to pivot is a mastered life skill many have yet to learn. It takes unwavering confidence and complete honesty to admit when you are no longer fulfilled and ready to let go and allow curiosity to lead you down another path. For Hannah Park, pivoting is an inherited matriarchal trait. Born into a creative family in Seoul, Korea, the fashion designer, who founded the loungewear label Oori Ott in 2018, began manifesting her creative path at the young age of eight – decidedly after witnessing her mother’s artistic evolution from sculptor to fashion designer.

Approaching each venture with consciousness remains at the core of her purpose. As so expertly stated in a message apropos for the masses, “Seems rhetorical to say, but we don’t need any more waste on this earth, so as a person designing or providing a product, it’s very important to consider the effects of creating the product as well as its existence, longevity, and function.” 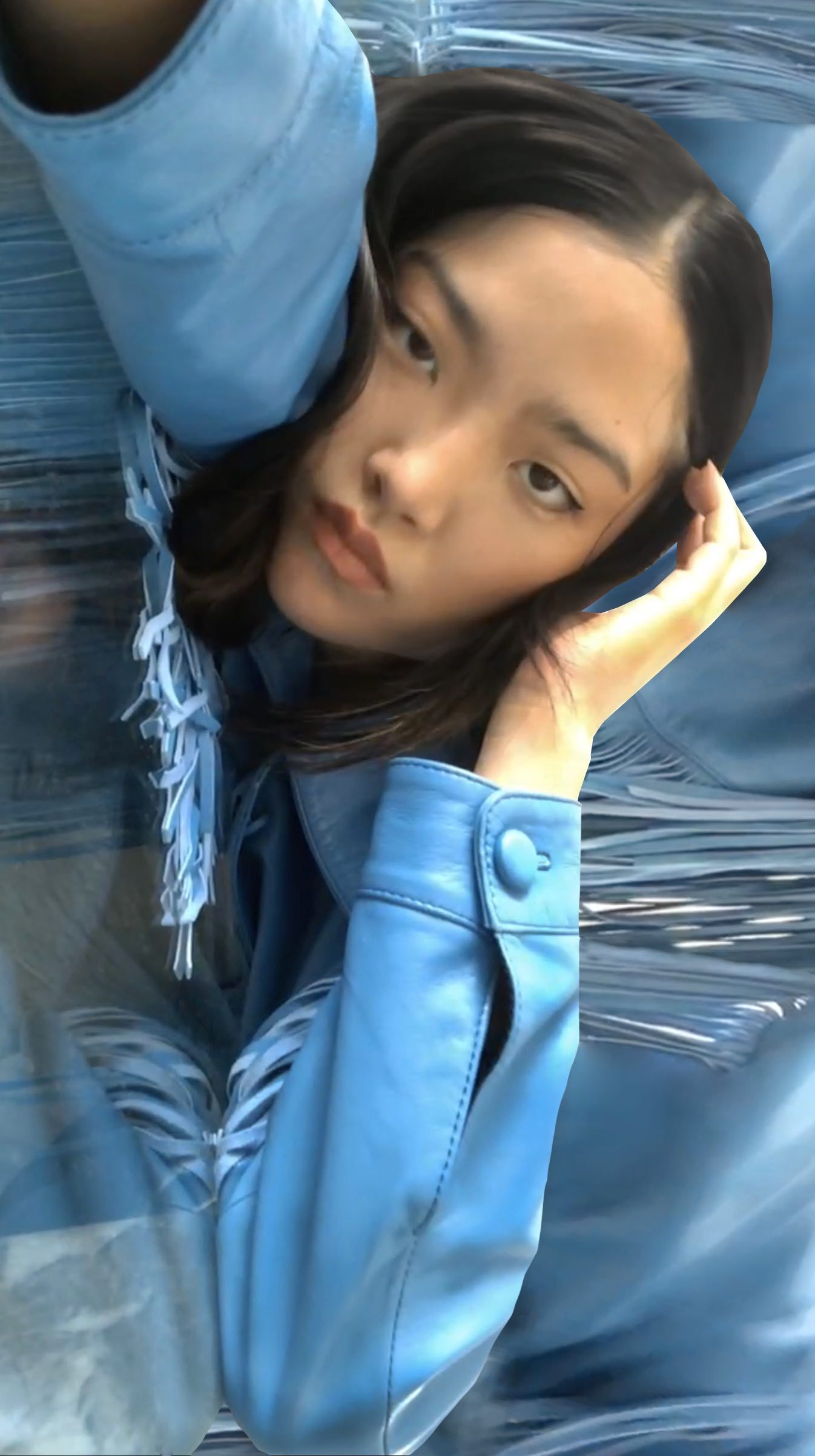 ‘I love when I can create or provide something that can inspire a positive emotion but also fulfill a functional need.’ — HANNAH PARK.

DC: Could you share a bit about your background and how your education, interests, and journey lead you to the present day?

HP: I was born in Seoul, Korea but moved to Sydney, Australia at a very young age then ended up in the US. Both my parents are very creative and artistic so from a very young age, I knew I wanted to be an artist of some sort. My mom was a sculptor before becoming a house wife. Then when my parents divorced, and she became a single mom, she became a fashion designer. I wanted to follow in her footsteps and dreamed of being a fashion designer since I was 8 years old. When I was 8, I would draw designs of denim capris with beaded tassels fringed crop tees and tube tops (this was the late 90s). My interest in fashion design led me to move to NYC. I went to FIT and worked for a few companies when I graduated (Calvin Klein, Gap, Vince). I quickly realized that I wasn’t fulfilled working at these corporate fashion companies. I was feeling stuck and needed to create something of my own, so I took the leap to create my own brand, OORI OTT.

When I moved to LA to start OORI OTT, I found myself becoming more and more interested in interior design. I found so many inspiring vintage furniture pieces in LA and needed an outlet to share this. My friend Ida and I started our IG @HIDA_modern so that we had a place to upload all things interior that we were inspired by. Our mood page then slowly and organically evolved into a business of selling curated vintage home goods.

DC: Does your heritage or upbringing play a significant role in your creative capacities?

HP: Yes, it definitely does. I have always been been drawn to traditional Korean typography, clothing, textiles, stationary, accessories, and food and object presentation. I take a lot of inspiration from “Han-Bok” designs and the art of “Bojagi” wrapping.

DC: As the Founder & Creative Director of OORI OTT and half of HIDA modern curated vintage home goods, what are your main areas of expertise?

HP: I can’t say that I am an expert at anything, but I love when I can create or provide something that can inspire a positive emotion but also fulfill a functional need. The way that translates through OORI OTT is designing clothes that make the wearer feel excited by what they are wearing but also feel comfortable and can wear it for a lifetime. The way it translates through HIDA, is providing objects to create a home or environment that takes you to your own dreamland but is also useful and useable every day. 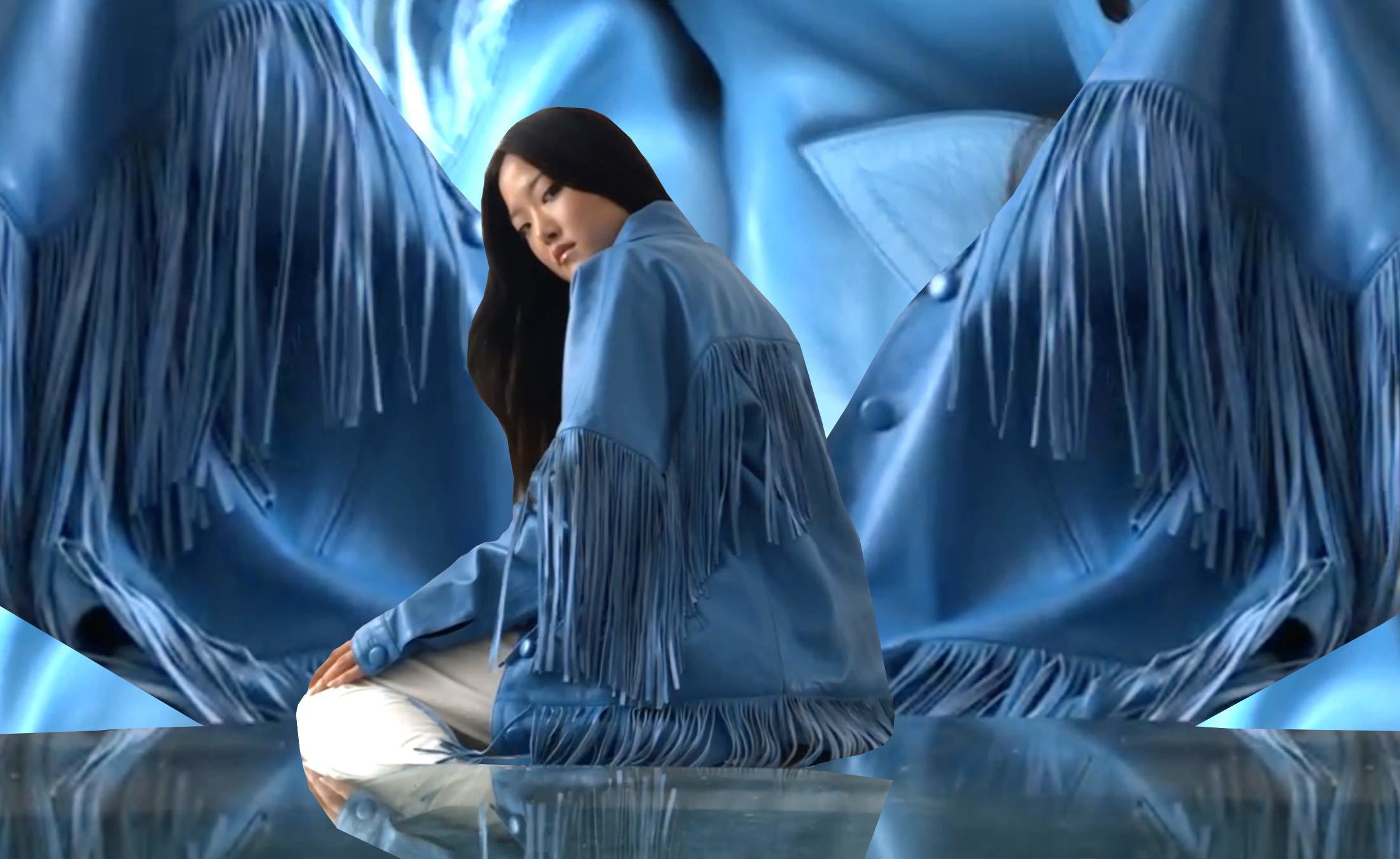 DC: Which era of design are you influenced by most? Are you more partial to textures or shapes?

HP: At the time of my first collection, I was inspired most by the glam, disco, postmodern colorful 70s-80s. This era wasn’t shy about decadence and colors which was really alluring to me and I’ve always been attracted to 80s art deco architecture because I love the softness of round shapes and curved lines.

Now, a different part of the 80s inspires me. The 80s had a lot of fascination with technology and the future. I love looking back to movies and imagery of the future from the eyes of the 80s and find my inspiration coming from this now. Movies like Bladerunner really inspire me in terms of fashion and architecture. So, there’s been a shift from the glitzy and colorful 70s-80s to the techno dystopian future 80s.

DC: As more consumers search for some level of sustainability and cause-based initiative built into the brands and products they acquire, can you tell us more about how you personally relate to this and why it was important to include in both business models?

HP: In terms of aesthetic design in our decade, everything is an adaptation, almost nothing is entirely original. Most of fashion and interior design is cyclical and based on nostalgia. The only new thing to invent is how can you make this thing from the past have a new more sustainable life with more impact.

As mentioned before, functionality has always been just as important to me as the aesthetic of design. Sustainability and functionality go hand in hand. If something is not sustainable, it eventually expires, and if it expires it doesn’t function and turns to waste. Seems rhetorical to say but we don’t need any more waste on this earth, so as a person designing or providing a product, it’s very important to consider the effects of creating the product as well as its existence, longevity, and function.

‘Sustainability and functionality go hand in hand. If something is not sustainable, it eventually expires, and if it expires it doesn’t function and turns to waste. Seems rhetorical to say, but we don’t need any more waste on this earth, so as a person designing or providing a product, it’s very important to consider the effects of creating the product as well as its existence, longevity, and function.’ — HANNAH PARK. 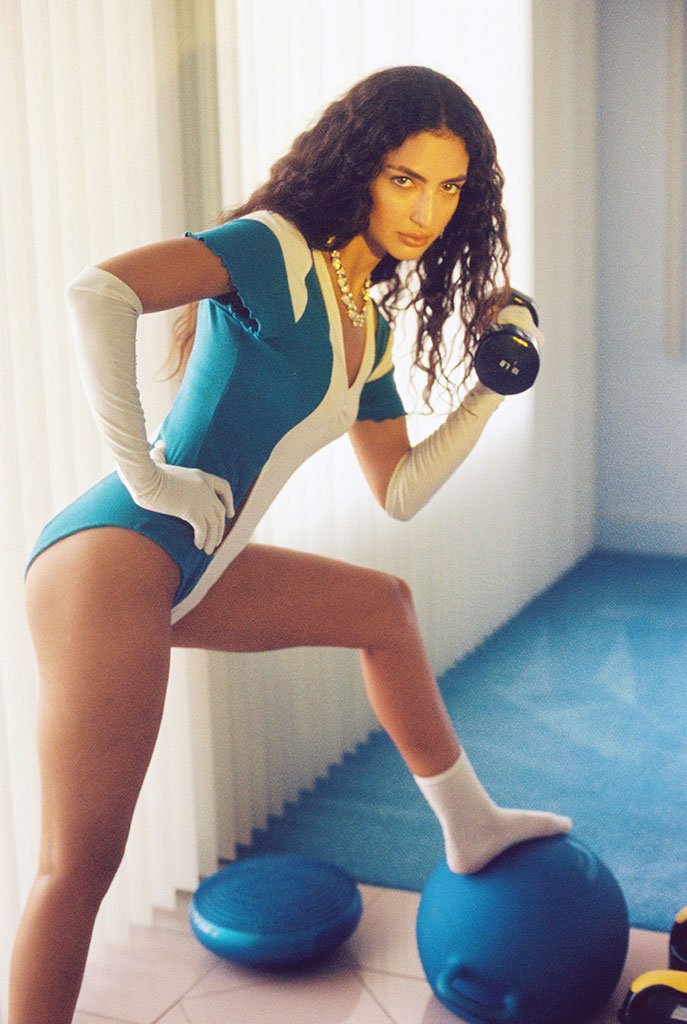 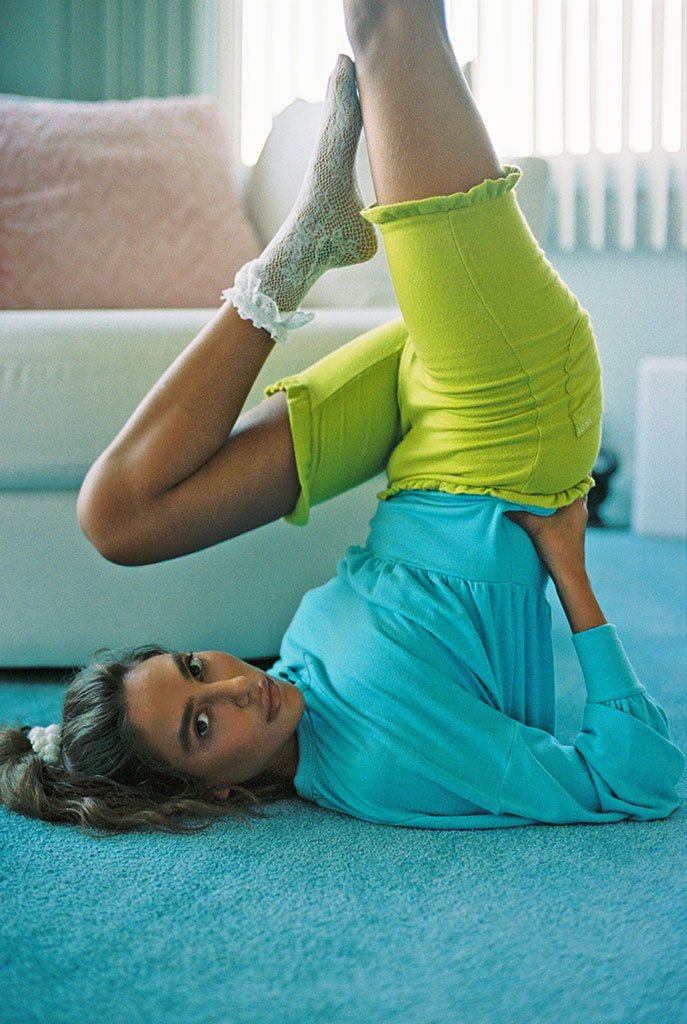 DC: We love your modern take on 70s leisurewear with OORI OTT. What inspired you to launch the brand? What does the name mean?

HP: I really wanted to create outfits that were casual and comfortable enough to wear around the house but special enough to make a statement on a night out. I was really inspired by Michelle Pfeiffer’s character in Scarface. She would wear these simple slips out on the night and looked so glam and stunning but also looked so effortless and comfy like she could just wear them straight to bed.

DC: When did the idea for HIDA modern come about? How did you and your partner Ida start to accumulate inventory? What do you think sets you apart from other vintage curators?

HP: HIDA modern started as a mood board. It was a place for Ida and I to dump all of our interior related images we had been hoarding. We both would find really great pieces of furniture we wanted but had nowhere to put them (I lived in a studio at the time) so we thought we should start sharing our finds with people on our IG.

Ida and I are really drawn to vintage pieces that look like they’re from the future. They can be from any era. At the time we started selling vintage furniture, most of the L.A. based sellers were selling specifically mid-century items and not so much postmodern pieces so that helped set us apart.

DC: This year has been challenging in many ways. How do you navigate uncertainty?

HP: I’m very lucky and grateful that I have all the essentials for living a great life. I have a place to live, don’t have to worry about food, I have really supportive friends and family, and I’m healthy so any kind of uncertainty that comes my way, I am fortunate enough to handle and I welcome it. Ever since I quit my corporate fashion job and started on my own ventures, my life and schedule has been uncertain. I think a bit of uncertainty can be a good thing because it forces you to reevaluate at every turn and really figure out what works for you. 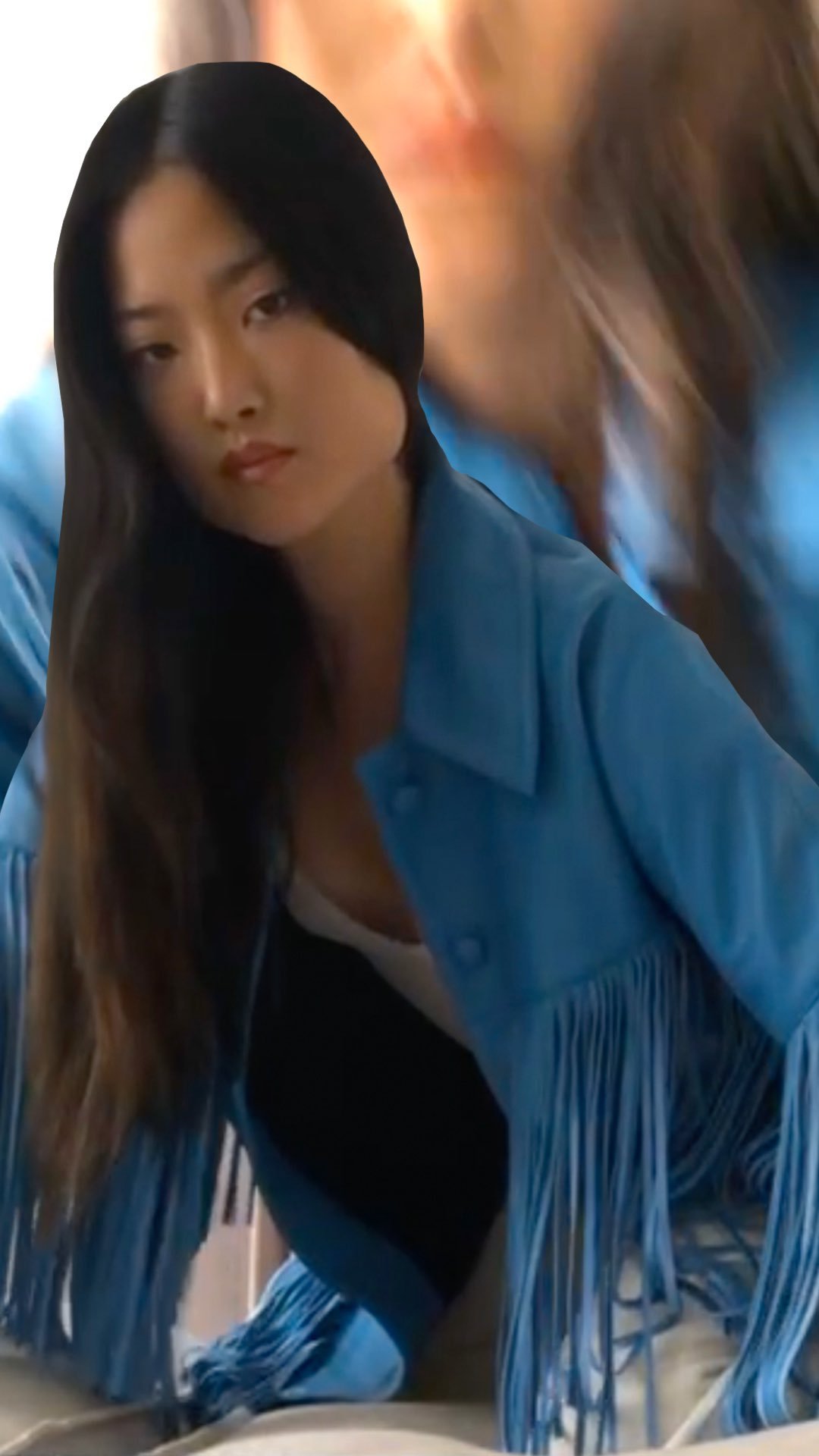 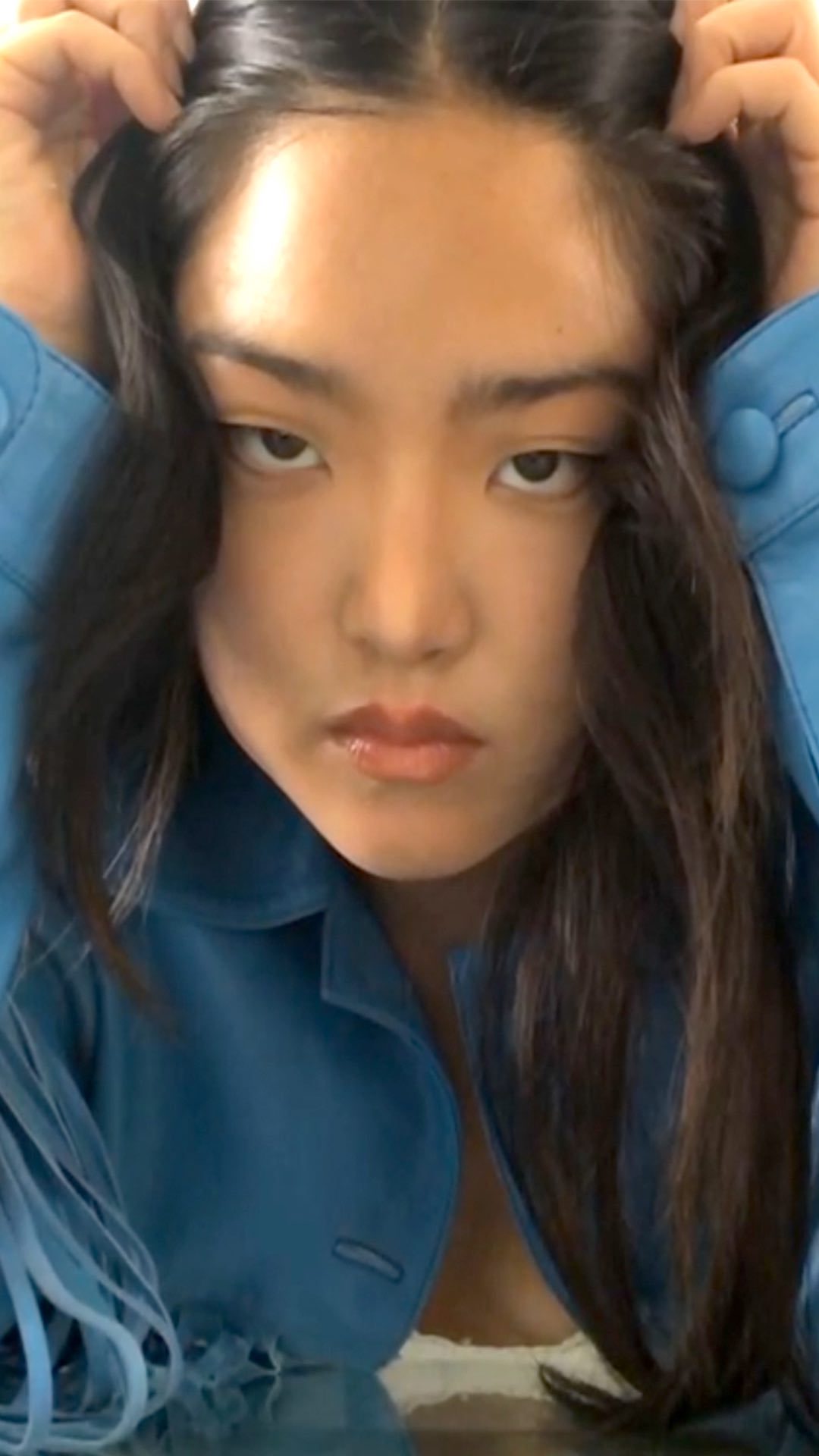 DC: What keeps you motivated? Has your perspective changed on certain areas of your life?

HP: My mom immigrated to the U.S. as a single mom and worked very hard to offer me the life I had. She completely fulfilled the role of 2 parents and gave me more than I ever needed so remembering and appreciating that always keeps me motivated.

Most recently, my perspective on my work life balance has changed. Being Korean and an immigrant, I was taught that work is #1 and you had to make sacrifices to succeed in work. But work took over and I wasn’t making time for my friends or even for myself. This year I realized that my life was very unbalanced and teetering but balance is the key to a happy life and success doesn’t just come from your work. It’s important to not take yourself too seriously and to have fun with everything you do.

DC: Is there anything you want people to know about you that you haven’t shared before?

‘This year I realized that my life was very unbalanced and teetering but balance is the key to a happy life and success doesn’t just come from your work.’ — HANNAH PARK. 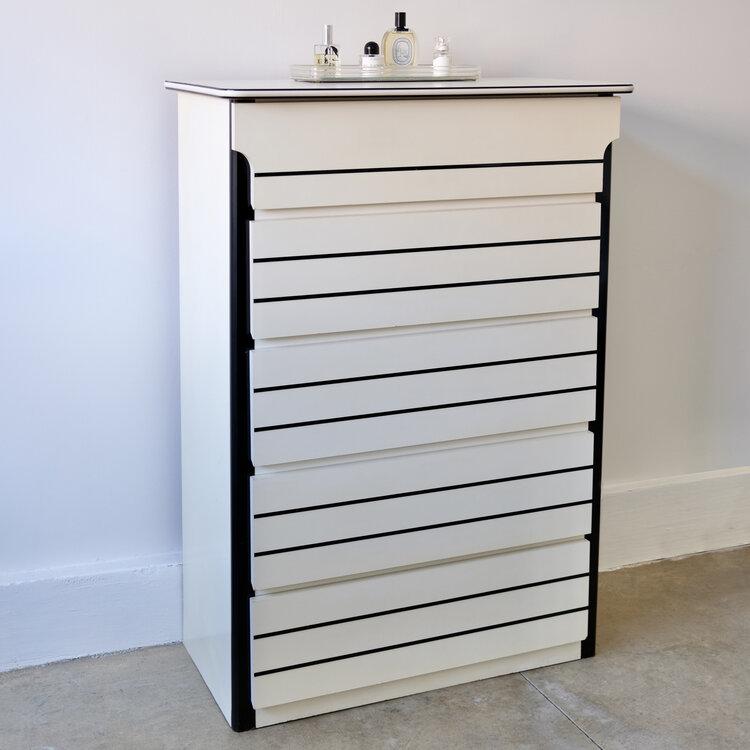 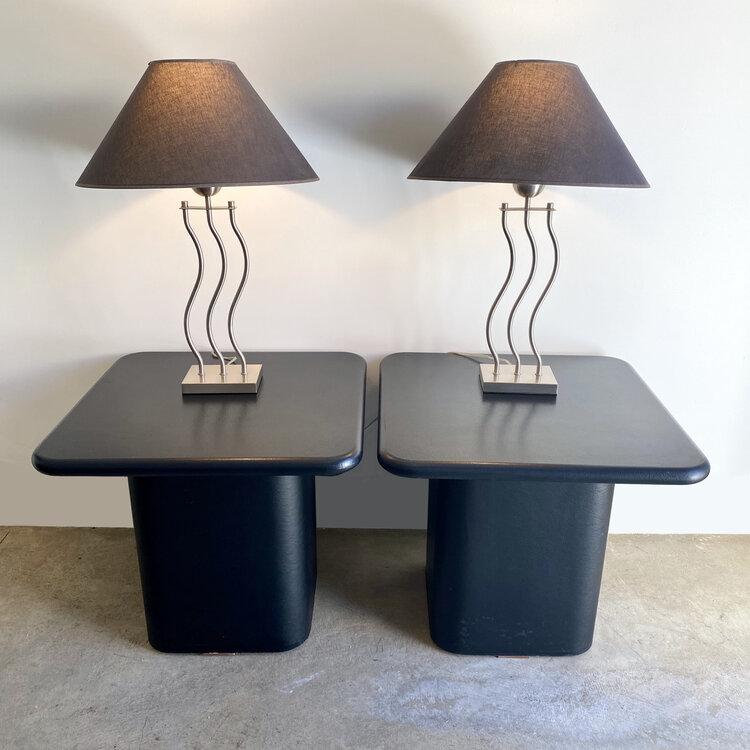 80’s Twin Side Tables Made by Lane at Hida Modern.

You feel most yourself here:
The beach.

In your free time you:
Cut my toenails

You find the most inspiration from:
Movies

A hidden gem in Los Angeles:
Kenneth Hahn state recreation center. My favorite place for a picnic under a tree. It has acres of empty rolling hills